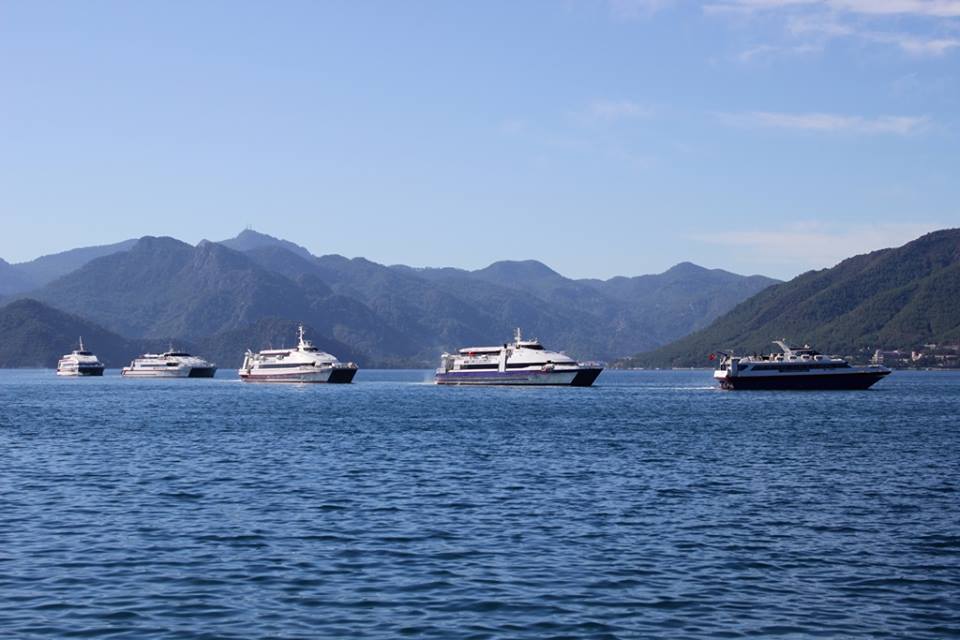 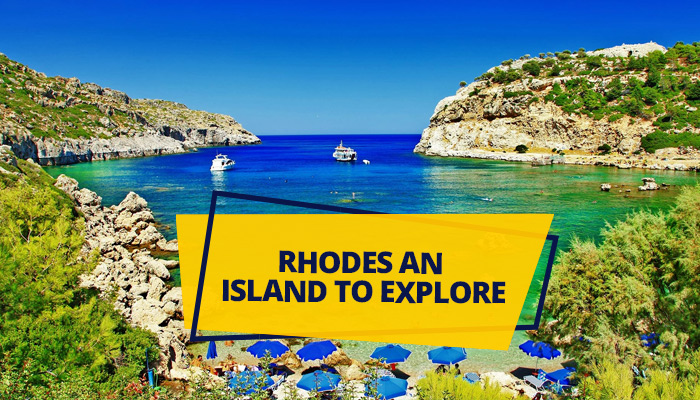 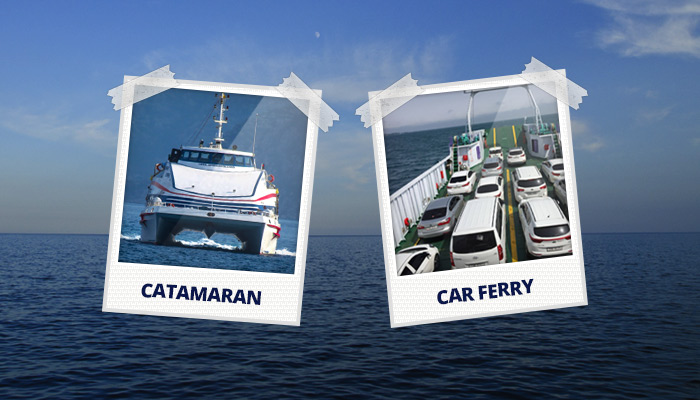 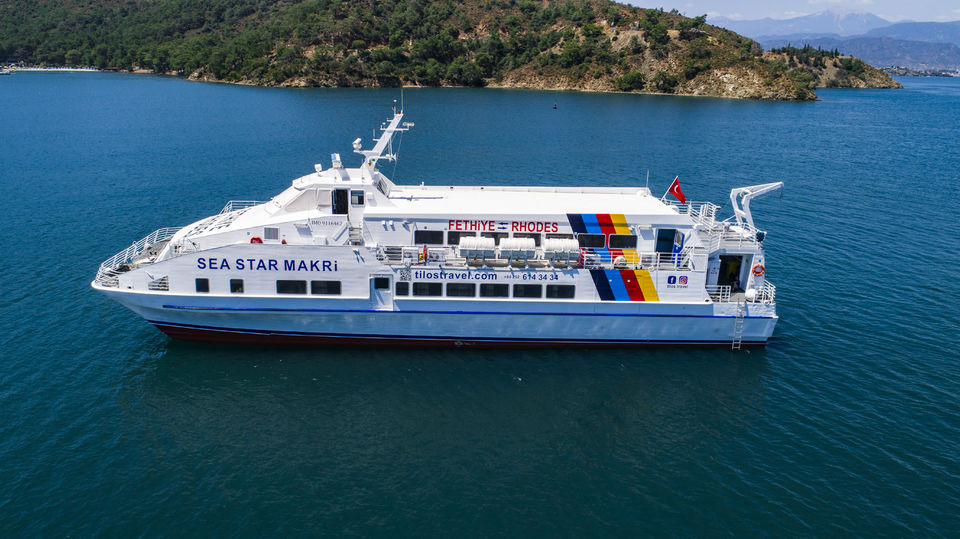 We can offer attractive rates on the fast Catamaran and car ferry services operating between Greek Islands and Turkey, both for individual travelers and groups.

Rhodes (or Rodos in Greek), in the south eastern Aegean Sea near the Turkish coast, is the island for year-round vacation, where it hardly ever rains. Due to its mild climate, and an exceptional range of options offered to travellers, Rhodes receives the lion’s share of visitors in the Dodecanese.

Beaches, scenery, nightlife, historic monuments, natural beauty and some of the best dining and accommodation options in Greece, Rhodes simply has it all!

Rhodes is the largest of the Dodecanese islands and one of the largest in the Aegean sea. It is situated approximately 17,7 km from the coasts of Turkey. The population is about 130.000 persons , of which approximately 60-70.000 reside in the city of Rhodes. Rhodes called from its local people the Rose of the Aegean and deserves its name because is one of the most beautiful Greek islands. Rhodes has the oldest tourist history from all the islands of Greece and is famous all over the world, this wonderful Greek island together with the islands of Kos, Crete, Mykonos, Santorini and Corfu attracts the most tourism in Greece. Many Hollywood films have been filmed here ,that helped more the global advertisement of Rhodes and its beauties. The island of Rhodes has an excellent tourist infrastructure with modern Hotels of every category .During the summer hundreds of charter flights landing at Rhodes airport in Maritsa. Rhodes town is divided to the new town and the old town from the big medieval wall. The beauty of Rhodes town is the old town with the medieval castles ,houses and streets. At the port the visitor will find Mandraki with its circular Market and the Cafes at the seafront ,further on are the Art Deco buildings of the Metropolis from the times of the Italian occupation. At the entrance of the port are the famous two columns with the two Deers at the place where supposed to be the colossus of Rhodes .The ancient city of Lindos is another of the main Attractions of the island.

TURKISH DELIGHTS: Search for bargains galore and sharpen your bargaining skills in the Grand Bazaar of Marmaris, a Turkish port less than 15 nautical miles east of Symi. Marmaris is an easy day trip during peak summer months (stroll down to Pavlou Quay to ask when the next boat goes), otherwise it’s a twice-hourly scheduled ferry journey via Rhodes. No visa is required for visit same day return but don’t forget your passport (and check to see if visa access has changed before you depart). Families should make a post-bazaar visit to the Marmaris Atlantis Waterpark, where dozens of impressive water slides, rides and pools make it the perfect place to cool down after a morning of heated bargaining.

Rhodes is a land of glorious contrasts: crusader castles rub shoulders with frescoed churches; medieval walls skim past modern villas; Art Deco buildings sit alongside ancient stones. Dating back to 408 BC, the capital city is a cultural jigsaw whose many layers of history can be pieced together through the varied architecture styles – Byzantine, Ottoman, Italian.

However, there’s more to the largest Dodecanese island than its history: miles of sugar-white beaches ring the coastline, while the mountainous interior conceals hidden waterfalls and springs. So if you’re looking for fun things to do, the best beaches to visit or just need some holiday inspiration, we’ve got you covered. Here’s our Rhodes travel guide, so you can make the most of your next holiday.

Visit Rhodes in April, May, September or October for warm, sunny days and pleasant evenings, without the high mercury and even higher prices of peak summer.

How to get there?

British Airways, easyJet and Ryanair all run direct flights between the UK and Rhodes. The airport is a 40-minute bus ride to Rhodes Town. Rhodes is one of the islands close to the Turkish port. It is possible to find a fast ferry from Rhodes to Marmaris every day in the summer season. During the winter months, this is twice a week.

Rhodes is the birthplace of art and culture. The capital city dates back to 408 BC, with a mix of Byzantine churches, theatres, mosques and monuments built by colonisers of every period. Julius Caesar and Cicero studied philosophy and rhetoric in the renowned schools of Rhodes Town, while archaeological sites across the island give clues to sophisticated ancient cultures. If you’re unsure what to do in Rhodes first, make a beeline for the ruins of Kamiros and the Lindos Acropolis. Next check out more contemporary art at the Museum of Modern Greek Art – the largest collection outside Athens – and at painted churches across the island; don’t miss Photis Kondoglou’s splendid neo-Byzantine frescoes at Evangelismós Cathedral.

View of the Old Town walls

Rhodes has a complicated and at times oppressive history. Its people are proud and traditional despite, or perhaps because of, numerous invasions over the years. The legacy of the Knights of St John is etched across the Old Town, when the crusaders used the island as their base from 1309 to 1522. The Ottomans then occupied Rhodes until 1912, when the Italians seized control of the island. In 1945, Rhodes was liberated and three years later was united with Greece. A couple of our favourite historical things to do in Rhodes is to visit the Archaeological Museum, housed at the Hospital of the Knights, and the Museum of the Castello, set in the Palace of the Grand Master – a medieval castle built by the Knights Hospitaller.

From craggy bays to picturesque caves and sandy stretches, Rhodes beaches are dramatic and diverse. At the southern tip of the island, Prasoníssi is one of the best windsurfing spots in Europe, with a sandspit at the point where the Aegean and Mediterranean seas collide. The head-high waves on the Aegean side lure expert windsurfers and kitesurfers, while the calmer Mediterranean side is suitable for beginners. A handful of centres offer lessons; try Prasonísi Center. If chilling out with a book is more your bag, the east coast is your best bet; hotfoot it to the silky sands of Tsambika, one of the best beaches in Rhodes. (We could have filled our Rhodes Travel Guide with stunning beaches but we thought we’d give them the justice they deserve and dedicate another blog to the best beaches in Rhodes.)

Go back in time in the Old Town

Medieval street in the Old Town

The Old Town of Rhodes is a living museum. Medieval walls wrap around the historic core, concealing a labyrinth of cobbled streets that will transport you to the Byzantine era. The best way to explore is to simply lose yourself in the warren of alleys, lined with buildings built by the Knights of St John. Here locals still live and work today as they did centuries ago.

Lindos is the typical Greek village you see on postcards: a glorious huddle of whitewashed cubes tumbling down to the topaz bay below. One of the best things to do in Rhodes is climb to the hilltop 4,000-year-old Acropolis, perched on a 116m-high rocky plateau. It was built in honour of the Goddess Athena, and the remains include the temple of Dionysus and a theatre. Down below, a clutch of excellent restaurants (don’t miss Mavrikos) and bars cling to the hillside alongside the tiny sea captains’ houses.

Rhodes is peppered with archaeological sites, the legacy of its complicated past. The Knights of St John created a wide-reaching network of castles used as lookout points; the best-preserved is Kastéllo Kritinías, whose ruins offer stunning views of Dodecanese islands all the way to Hálki. For frescoes galore, head south to the Thárri monastery, one of the finest churches in Rhodes, dating back to 1300. 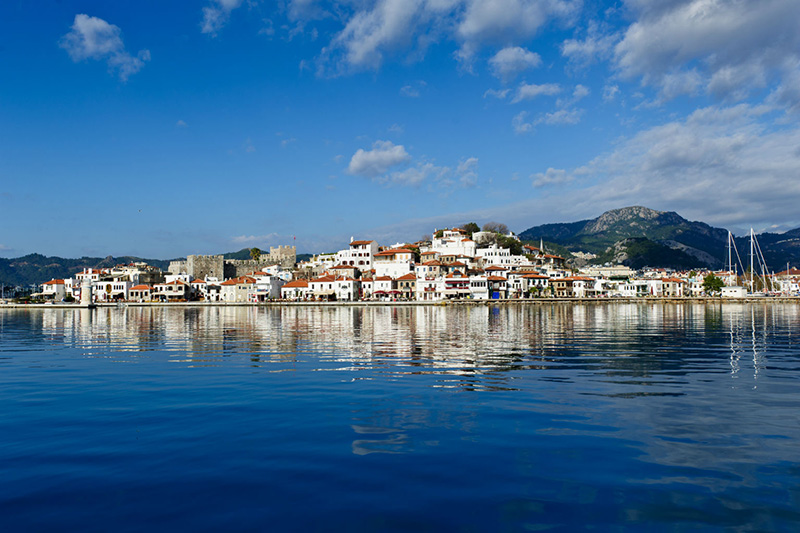 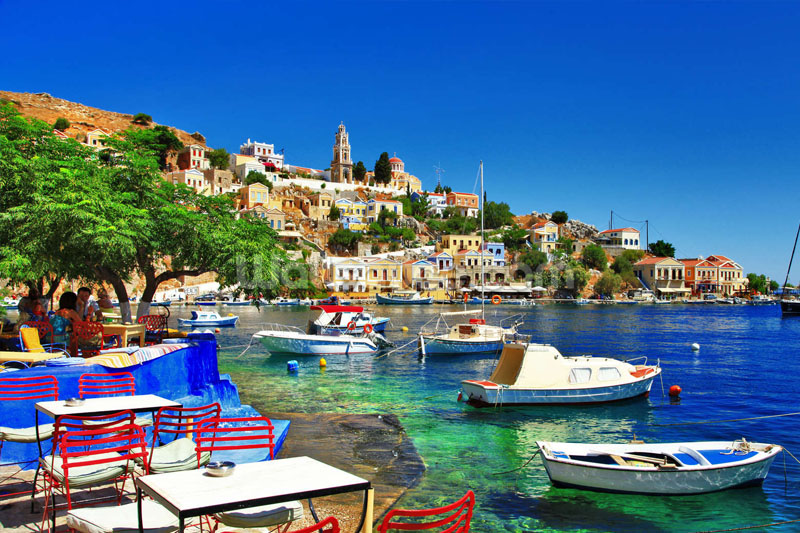